Red Teaming Made Easy with Exchange Privilege Escalation and PowerPriv


TL;DR: A new take on the recently released Exchange privilege escalation attack allowing for  remote usage without needing to drop files to disk, local admin rights, or knowing any passwords at all.  Any shell on a user account with a mailbox = domain admin.  I wrote a PowerShell implementation of PrivExchange that uses the credentials of the current user to authenticate to exchange.  Find it here: https://github.com/G0ldenGunSec/PowerPriv

The Exchange attack that @_dirkjan released last week (https://dirkjanm.io/abusing-exchange-one-api-call-away-from-domain-admin) provides an extremely quick path to full domain control on most networks, especially those on which we already have a device that we can run our tools on, such as during an internal network penetration test.  However, I saw a bit of a gap from the point of a more red-team focused attack scenario, in which we often wouldn’t have a box on the internal client network that we can run python scripts on (such as ntlmrelayx and PrivExchange) without either installing python libraries or compiling the scripts to binaries and dropping them to disk to run.  Additionally, we may not have a user's plaintext or NTLM hashes to run scripts with remotely via proxychains.

Trying to find a more effective solution for this scenario, I wrote a PowerShell implementation of PrivExchange called PowerPriv that uses the credentials of the current user to authenticate to the Exchange server.  This gets around the problem of needing credentials, as we’ll now just use the already-compromised account to authenticate for us.  However, this was really only a first step as it still required that we relay to the domain controller through ntlmrelayx, meaning that we would still need a box on the network running Linux / need to install Python / etc.  To put the rest of the pieces together, I used a bunch of the great tunneling functionality that comes in Cobalt Strike to set up a relay for the inbound NTLM authentication request (via HTTP) from the Exchange server, through our compromised host system, to the Cobalt Strike server, and back out to the target domain controller (via LDAP).  At a high level, this is what we’re doing: 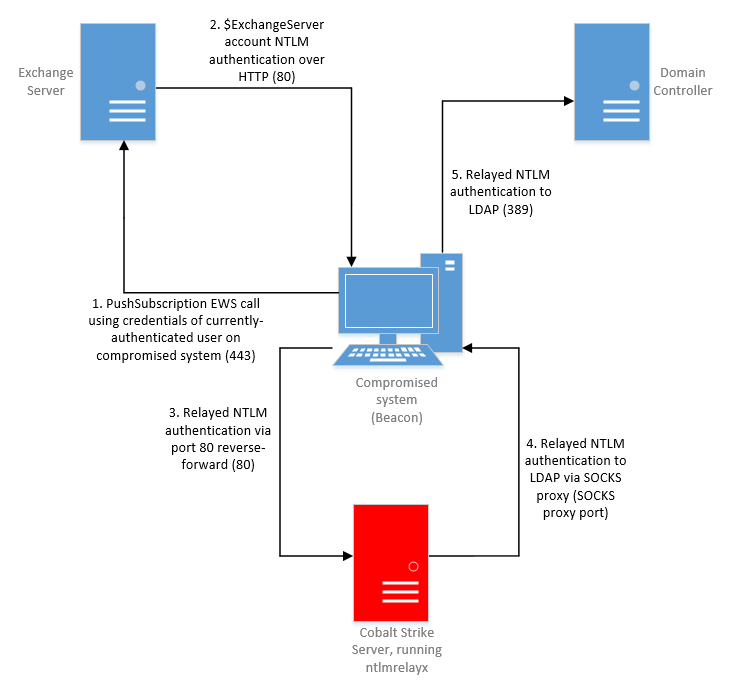 So, in more depth, what are we actually doing here?  To begin, let’s get a ‘compromised’ system and check who the local admins are: 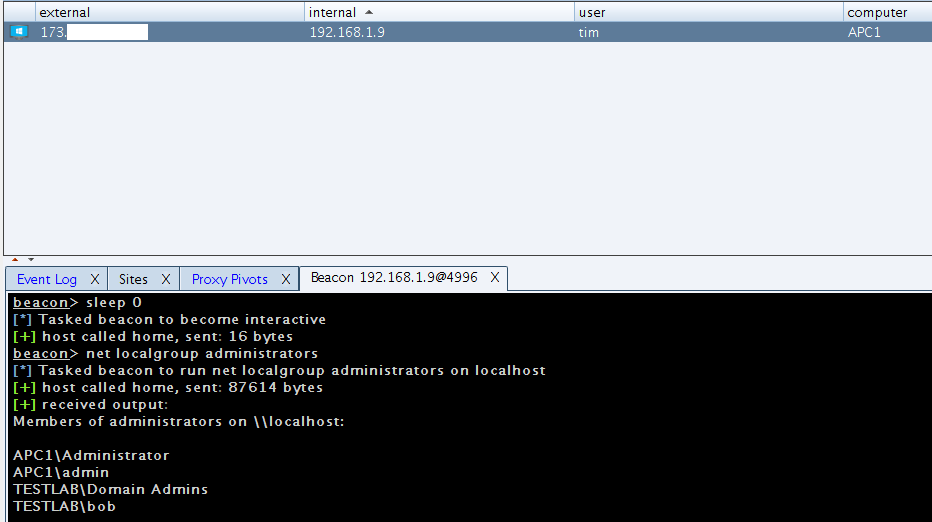 Cool, we’re running as ‘tim’, a user who is not currently an admin on this system, but that shouldn’t matter.  Next, let's get our forwarding set up using the 'socks' + 'rportfwd' commands in Cobalt Strike and the /etc/proxychains.conf file:

Once we've configured these, we can use proxychains to forward traffic through our SOCKS proxy set up on port 36259.  To perform the relay, we'll run ntlmrelayx, forwarding traffic through proxychains in order to get it back to the target environment.

After this is up and running, we are ready to kick off the attack.  I’m using the PowerShell implementation of PrivExchange that I wrote called PowerPriv to authenticate using Tim's credentials.  In this example, all we need are the IPs of the Exchange server and the system which we currently have a shell on, since our compromised system will be relaying the incoming request to our attack server:

After this, we sit back and wait a minute for the NTLM authentication request to come back from the remote Exchange server:

Looks like our attack succeeded. Let's see if Tim can now perform a dcsync and get another user’s NTLM hash, even though Tim is only a lowly domain user: 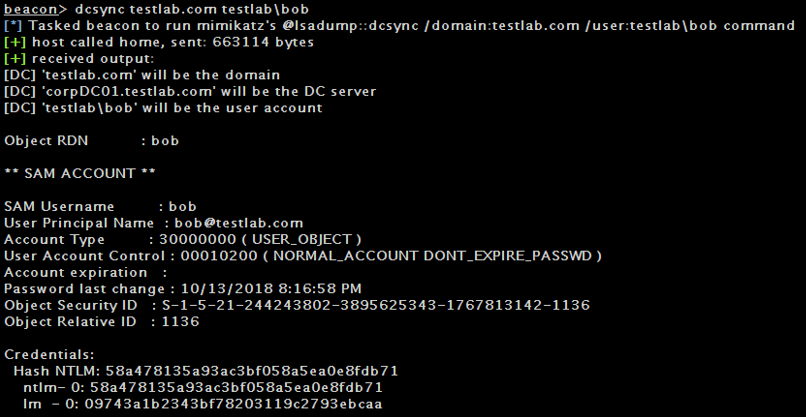 A resounding success!  All without ever needing to know what Tim’s password is, perform any poisoning attacks, or drop files onto his system.   As to why we’re using the Cobalt Strike dcsync module vs secretsdump – in this scenario we do not have a plaintext password or NTLM hash for Tim (or any user), which would be required if we want to run secretsdump from our box via proxychains.  If you do have credentials, you can definitely use whichever method you prefer.

A few gotchas from during this process:

Notes and links:
@_Dirkjan’s blog which covers the actual Exchange priv esc bug that he found in greater depth: https://dirkjanm.io/abusing-exchange-one-api-call-away-from-domain-admin/

*This technique was demonstrated in the article with Cobalt Strike.  However, this same vector is possible using other agents that support port forwarding and proxying, such as Meterpreter.

Popular posts from this blog

Executing Macros From a DOCX With Remote Template Injection

- July 18, 2018
The What: In this post, I want to talk about and show off a code execution method which was shown to me a little while back. This method allows one to create a DOCX document which will load up and allow a user to execute macros using a remote DOTM template file. This attack has been seen in the wild, is partially included in open-source offensive security tools , as has been blogged about by Cisco Talos , but in the blog post and the open-source tool, it is only seen as a credential stealing attack typically over the SMB protocol. This blog post will detail how to use this method to download a macro-enabled template over HTTP(S) in a proxy-aware method into a DOCX document. The Why: The benefit of this attack versus a traditional macro enabled document is multidimensional. When executing a phishing attack against a target, you able to attach the .docx directly to the email and you are very unlikely to get blocked based on the file extension. Many organizations block .doc or .do
Read more

- December 20, 2019
There are a ton of great resources that have been released in the past few years on a multitude of Kerberos delegation abuse avenues.   However, most of the guidance out there is pretty in-depth and/or focuses on the usage of @Harmj0y’s Rubeus.   While Rubeus is a super well-written tool that can do quite a few things extremely well, in engagements where I’m already running off of a primarily Linux environment, having tools that function on that platform can be beneficial.   To that end, all the functionality we need to perform unconstrained, constrained, and resource-based constrained delegation attacks is already available to us in the impacket suite of tools. This post will cover how to identify potential delegation attack paths, when you would want to use them, and give detailed  walkthroughs  of how to perform them on a Linux platform.   What we won’t be covering in this guide is a detailed background of Kerberos authentication, or how various types of delegation work in-depth
Read more

One Click to Compromise -- Fun With ClickOnce Deployment Manifests

- July 30, 2020
Note: I submitted a report to MSRC regarding the hash-disclosure vulnerability associated with ClickOnce deployment manifests. After review I got a response back earlier in July where it was noted that the vulnerability did not meet the bar for immediate servicing and was given the green light to disclose. Edit 9/22:  MS has remediated the NTLM-disclosure part of this issue as of KB4576630 https://support.microsoft.com/en-us/help/4576630/kb4576630   However, this method will still work as a delivery mechanism for stage-0 payloads. TL;DR ClickOnce Deployment Manifests are a relatively unknown way to both get an initial payload into an environment as well as remotely retrieve NTLM challenge-response hashes over HTTP.  Hash retrieval occurs on initial file open (before any warnings pop) meaning that even if the user opts to close out on the warning, we still have a hash we can attempt to crack.   IE also has some interesting interactions with these files and will automatically execute
Read more